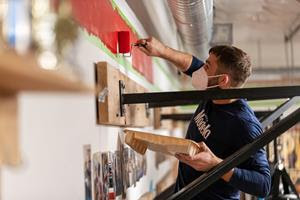 CHICAGO, Nov. 09, 2021 (GLOBE NEWSWIRE) — Modelo, the beer brewed for those with The Fighting Spirit™, along with long-standing partner UFC®, the world’s premier mixed martial arts organization, and national housing nonprofit, Rebuilding Together, announced the completion of renovations to Cappy’s Boxing Gym located in the Central District of Seattle, Washington. Cappy’s Boxing Gym is the fourth and final gym that Modelo, UFC and Rebuilding Together will renovate this year as a part of their initiative to boost the Fighting Spirit across the nation at select gyms that make a positive impact in their communities.

“The work that Modelo has been able to do with UFC and Rebuilding Together revitalizing local gyms is an incredible victory for everyone involved,” said Rene Ramos, Vice President of Lifestyle and Experiential, Sponsorships for Constellation Brands. “We look forward to unveiling the next steps for this social impact program to continue our dedication to creating more unified, resilient and prosperous communities.”

UFC welterweight and Washington native, Michael Chiesa, lent a helping hand in the renovation process at Cappy’s. Chiesa won the lightweight tournament during Season 15 of The Ultimate Fighter earning a contract with the world’s premier mixed martial arts organization in 2012. Since his debut inside the Octagon, Michael has become a fan favorite, registered an 11-5 record and currently ranks No. 7 in the welterweight division. 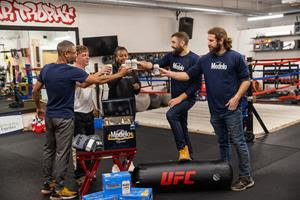 “It is an honor to have the opportunity to be involved with revitalizing a business that is assisting athletes in my home state,” said UFC welterweight Michael Chiesa. “The work that Modelo and UFC are doing will help a new generation to embrace their Fighting Spirit and feel inspired to go out and achieve their dreams- no matter what challenges they face.”

Founded in 1999, Cappy’s Boxing Gym has been a beloved Seattle institution for decades, offering community members a safe space to train and take boxing classes while improving overall fitness. Focused on creating a positive environment where athletes of all background can grow physically and mentally, Cappy’s offers scholarships to cover membership fees and hosts free public workouts in local parks. In addition, the gym recently launched a program with a budding nonprofit organization, Minority Veterans of America, to offer special classes focused on health and wellness for veterans.

“Boxing is much more than just physical fitness,” said Cappy’s Boxing Gym Owner Mike Priebe. “When I took over Cappy’s, I made it my mission to help athletes develop skills inside the gym that can help them in real life scenarios. The work Modelo, UFC and Rebuilding Together are doing for us will help take that mission to the next level.”

As the pandemic hit the Seattle area hard and the gym was forced to close in-person classes, Cappy’s quickly adapted to offering virtual classes on a pay-what-you-can model to continue serving its members throughout lockdown. The funds provided by Modelo and UFC helped Priebe make up for income lost during the pandemic and he was able to bring in a local artist to paint murals on the gym’s walls and get new equipment including heavy bags, gloves and focus shields and mitts.

“The completion of the Seattle project marks the fourth successful gym revitalization initiative with Modelo and UFC,” said Caroline Blakely, President and CEO of Rebuilding Together. “It is incredible that we have been able to do so much good for local communities across the nation through small businesses that play a vital role in the health and overall well-being of its residents.”

This community-based initiative coincides with the extension of the ongoing partnership between Modelo and UFC that first established Modelo as the “Official Beer of UFC” in 2018.

“UFC is pleased to extend the partnership with Modelo, an amazing brand that shares our unmatched commitment to a passionate fan base,” said Paul Asencio, UFC Senior Vice President of Global Partnerships. “We are excited about the work we accomplished this year to revamp gyms and inspire athletes across the country and look forward to seeing the next generation of fighters come from these communities.”

The gym revitalization program is another proud step for Modelo in its ongoing commitment to support the Fighting Spirit in communities across the nation. Model has donated funds to help alleviate the education debt of military veterans, funded the provision of essential supplies, equipment and resources to protect healthcare workers throughout the pandemic, and supported COVID-19 relief programming and related small business loans.

About Modelo®
Born in 1925 in the small town of Tacuba, Mexico, Modelo has been bringing distinctive high-quality beer to people ever since, including Modelo Especial®, Modelo Negra®, Modelo Chelada Especial™, Modelo Chelada Tamarindo Picante™, Modelo Chelada Limón y Sal™ and Modelo Chelada Mango y Chile™. Modelo Especial is a golden, full-flavored Pilsner-style Lager with a clean, crisp finish whose original recipe was first brewed under the vision to create a ‘model’ beer. As the #1 imported beer in the U.S., Modelo Especial surpassed 150MM cases sold in 2021. The Modelo family of beers are exclusively brewed, imported and marketed for the U.S. by Constellation Brands.

About UFC®
UFC® is the world’s premier mixed martial arts organization (MMA), with more than 625 million fans and 178 million social media followers. The organization produces more than 40 live events annually in some of the most prestigious arenas around the world, while broadcasting to nearly 900 million TV households across more than 170 countries. UFC’s athlete roster features the world’s best MMA athletes representing more than 75 countries. The organization’s digital offerings include UFC FIGHT PASS®, one of the world’s leading streaming services for combat sports. UFC is owned by global sports and entertainment company Endeavor, and is headquartered in Las Vegas, Nevada. For more information, visit UFC.com and follow UFC at Facebook.com/UFC, Twitter, Snapchat, Instagram and TikTok: @UFC.

About Rebuilding Together®
Rebuilding Together is the leading national nonprofit organization repairing the homes of people in need and revitalizing our communities. Through its national network of affiliates, Rebuilding Together works proactively and collaboratively with community leaders, long-term residents, funders and volunteers to foster dialogue and create safe, healthy communities across the country. Learn more and get involved at rebuildingtogether.org.

Photos accompanying this announcement are available at: